Book
Bound for Beauty #21 152 p., [9] leaves of plates : ill. (photogravure) Tissue guarded frontis. Illustrated with 8 photogravure tissue guarded plates. "Madame Butterfly" is a short story by the American lawyer and writer John Luther Long. It is based on the recollections of Long's sister, Jennie Correll, who had been to Japan with her husband - a Methodist missionary, and was mainly influenced by Pierre Loti's 1887 novel Madame Chrysanthème. It was first published in Century Illustrated Monthly Magazine in 1898, together with some of Long's other short fiction. Long's use of the exotic and the classical in "Madame Butterfly" reflected the blending of Japanese and traditional styles in the arts and crafts movement around the turn of the 19th century and American fascination with Japan that began with the "opening of Japan" by Matthew C. Perry in 1854. 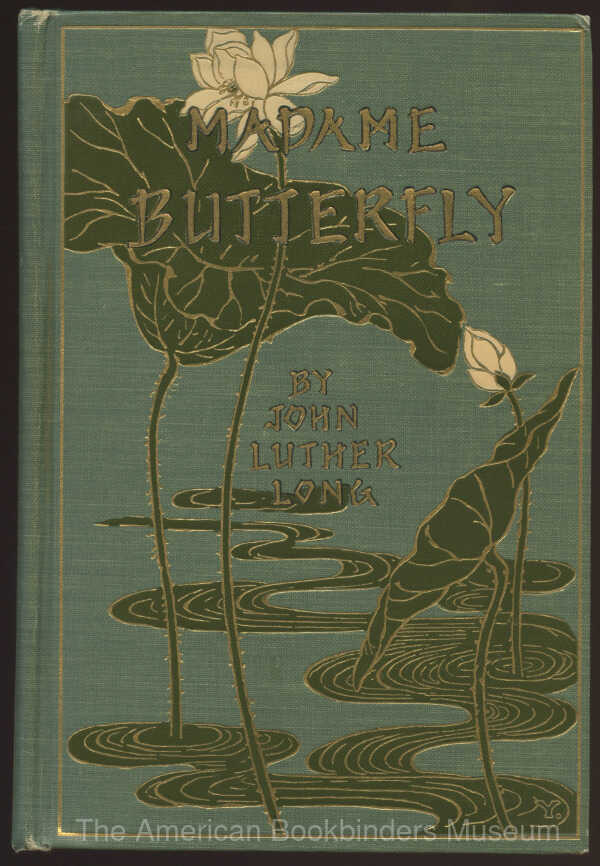 Top edge gilt. Deckled edges. Bound in a decorative cloth binding designed by the Japanese artist Genjro Yeto and signed with his monogram "Y." The covers, in teal cloth, stamped in dark green, gilt and white, depict long stemmed lotus blossoms rising from a rippling waterscape. The design is enclosed within a gilt border, as is the spine which has the title in distinctive typography descending vertically.

NYC Opera Project via Columbia; explains the history of the story and its development into an opera.